The Short Story Contest results are in!

Comments like “the stories were so well thought out and written”, “keep writing” and “hope you enter again next year” were made by the judges.

Emily who wrote Journey to the North Pole and Elliot who submitted The Invisible Ringmaster. Emily & Elliot will be receiving Family Day Passes to Jungle Cat World! 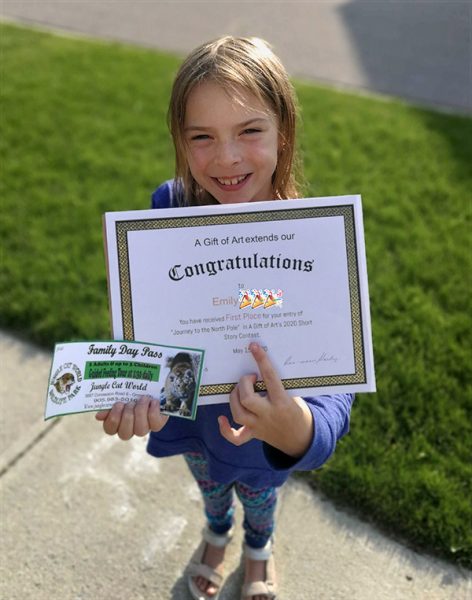 In the Adult category, congratulations to:

Rick Lovitt who submitted The Old Man and Leah Murray who submitted Flop House Follies: Merman. Rick & Leah tied for third place and will be splitting the $25.00 prize

Andrea O’Farrell who submitted A Match at A Time Hortons Drive Thru. Andrea won second place and the prize of $50.00

For First place, congratulations to Jennifer Lovitt who submitted The Loser and has won the first prize of $200.00!

We want to say thank you to everyone who entered! The showcase of talent was extraordinary and we encourage everyone to continue writing!

JOURNEY TO THE NORTH POLE

It was Christmas Eve and I woke up hearing footsteps. They sounded like they were coming from the roof. I opened my window, reached my head out, and saw reindeer and a sleigh. Then I ran down the stairs and got a ladder.

I climbed up the ladder to the roof and I saw that in the sleigh was a red sack full of presents. I was curious of who the presents were for so I jumped into the red sack to see but before I jumped into the sack I saw a big red figure. I did not know who it was.

Then before I knew it, the big red sack in the sleigh was moving. When the sleigh stopped and I peeked out of the red sack, I saw a sign that said the North Pole. Then I thought to myself, “Was I really at the north pole?”

I hopped out of the sack and saw someone standing in front of me. It was the same big red figure that I saw before. Then it said “HO! HO! HO!”

“Santa, is that you? Why are we back in the North Pole?” I asked.

“Yes, it is me. I needed to come back to get more presents. What is your name and how did you get here?” he asked.

“My name is Emily and I jumped into your red sack in the sleigh to get a closer look at who the presents were for and then POOF I’m here.”

“That sounds like an adventurous journey.” He said. “Do you want to go to the Elf’s Toy Workshop with me?”

When I opened the workshop door with Santa, I saw elves everywhere including my Elf on the Shelf, Joey. I asked him what he was making. He said he was finishing a bike for a 6-year-old girl named Ambreen. She was being good this year.

Then Santa said “HO! HO! HO! Time to deliver the rest of the presents! Emily, would you like to come with me?”

“All the reindeer are sick, but Rudolph is not. We are still able to deliver all the presents. Make sure you get Ambreen’s bike and all the rest of the presents. Now let’s get on the sleigh.” Said Santa.

Then Santa said, “On Rudolph!” and we flew into the night sky.

We delivered all the presents together but I missed a name on the nice list. It was my best friend Olivia. I told Santa we needed to go back to Canada.

Then we delivered it to Olivia’s house and afterward we went back to the North Pole.

“Thank you Emily, but I did not give you your present yet!” said Santa. “I will give you it now.”

When I unwrapped the present I was so excited. “Yaaaay! A Fitbit! Thank you, Santa! I’ve wanted one of these forever!”

Santa flew me back to my house and on the way home, I fell asleep in the sleigh.

When I woke up I was in my bed. “Was that real? Did I really meet Santa?” But I looked at my wrist and there was nothing there.

Disappointed I got out of my bed and I went downstairs with my family. I saw a little box under the Christmas tree that said “To Emily, From Santa.” I unwrap the present.

“Well I had a crazy dream!” And everyone started laughing.

This was the BEST CHRISTMAS EVER!